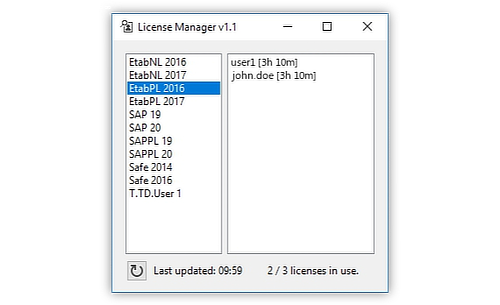 While working for an engineering consultancy, it quickly became apparent that the CSI (Computers & Structures Inc.) suite of engineering software we owned was being poorly utilised. Due to the high cost of licenses, we only had access to a handful of network licenses which were allocated during weekly planning meetings, however this solution did not provide enough flexibility in day-to-day use.

The only tool which could be used to determine which licenses were in use required admin privileges, meaning regular users had no way of determining if there were licenses available or who was using the licenses at a given time. As a result, there was always a rush to ensure that staff had access to the software during allocated time slots, and there was a reluctance to temporarily give up licenses when not needed.

In order to get around this issue, I built a license management tool which would allow everyone in the office to quickly get an overview over;

The tool was built to be as lightweight as possible, quick and easy to use. A full write-up on how I developed this is coming shortly.